A look back the Festival of Archaeology & the Cranborne Chase AONB

The AONBs first year taking part in the Festival of Archaeology was a resounding success. We kicked off with a day seminar on the history and archaeology of the AONB landscape on the 23rd July. This was attended by 87 people from across the counties of Dorset, Wiltshire, Hampshire and .
James Stanford, AONB Chair welcomed everyone to the day, and I provided a brief overview of the area. We were treated to fascinating talks on the new perspectives and discoveries in the Wylye and , from Mike Allen and Julie Gardiner. INtroduied to new discoveries from the Damerham Archaeology Project (Helen Wickstead & Martyn Barber), and the Teffont Archaeology Project (David Roberts). Martin Papworth provided an overview of Durotrigian identity in the Iron Age. We also learnt about new aerial archaeological discoveries (Martyn Barber) and new discoveries from reanalysing the Wor Barrow (Mike Allen)
The AONB team felt the day went extremely well and this was backed up by emails we have received subsequently, including comments like the following:
“I want to congratulate you, and thank you for organising such a wonderfully inspiring and informative seminar on Saturday.  The speakers were brilliant and I certainly want to keep in touch with what they are all doing”.
The following Saturday 30th, 26 people joined us at Martin Green’s Farm to visit his museum and explore the archaeology on his farm. In the afternoon we had a guided walk around Gussage and Wyke Down. The rain held of and we had glorious views across the chase. This event was so popular we were oversubscribed three times.
Posted by Emma Rouse - Wyvern Heritage at 12:20 No comments: 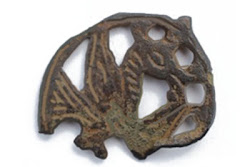